Posted by Living Faith Realities at 10:51 PM No comments:

I am constantly amazed by many in the Body of Christ. It seems we have many that think they can get to their Maximum Potential...just them and the Holy Ghost. I am not sure why folks think this way, but I suspect it is a defense mechanism that they have adopted because of hurt or hurts incurred in their journey in Christ at the hands of either a or several power-hungry abusive leader (s).

This really is a sad thing when those that are tasked with pouring into, developing, and raising up Believers to live to their full potential themselves have not developed Christ-like character and are in positions they really should not be in. Because of this, many who are leading are unqualified and this ungodly pattern just repeats.

I have been of all people highly favored to be not just the spiritual offspring of Edith & Leo Fram, as many are, but I am also the natural offspring of them as well and would not be where I am or doing what I am doing if it wasn’t for what they have poured into me. To be sat down and poured into and lovingly corrected and channeled into my destiny, without telling me what my destiny was, simply letting me come to the realization on my own, is perhaps the greatest thing they ever gave me, and has become a major part of how I deal with my spiritual sons and daughters today, as many of them can attest to.

There were two National type Fathers that really poured into me, most likely without realizing that they did. Way back in my teenage years during the late ‘70s & early ‘80s, I grew up in R.W. Schambach’s tent meetings and crusades in the New York City Metro Area, and his ministry had a huge impact on my life. Beginning around the same time I began to read the books of, and listen to the tapes of Kenneth E. (Dad) Hagin, which was followed by me getting to sit at his feet for two years at Rhema. Next to my own father, Dad Hagin most likely had the greatest impact on my life and ministry. 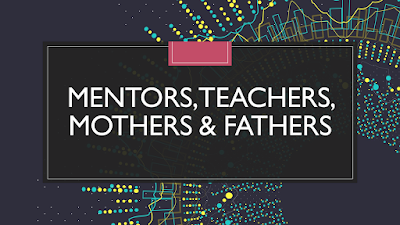 After I graduated from Rhema in 1987, I was privileged to get all kinds of hands-on ministry experience in so many different areas while being a part of Victory Christian Center in Tulsa, OK. Pastor Billy Joe Daugherty was most likely the meekest and humblest leader that I have ever encountered, and much of who he was, was lived as an example that forever changed my perceptions of leadership and my life.

After I moved home to NJ from OK in the early ‘90s God led me to serve in a church in Rahway, NJ for 10 years. It was here that I had my first of many Peer Level Relationships that greatly impacted my life. It was through our friendship and us both being PK’s that I opened myself up to the influence of Pastor Fred McCarthy. He surely rubbed off on me during the 10 years that I was with him, and he softened me greatly.

As My journey continued into the 20-teen years, God saw fit to bring me under the influence of Dr. Mike Brown, from Strength and Wisdom Ministries, in Branson, MO.  There are so many wisdom keys and principles that he poured into my life sitting in his leadership seminars and as he spoke regularly at the local church I was part of for 10 years. Much of what I have incorporated into my Mentoring and Fathering Ministry has been adapted from what he has taught and demonstrated.

Over the last 20 + years God has helped me build a Peer Leval Relationship with Angie Dorman, who is gifted in ways that I am not. She legitimately cares for me and protects me and my blind spots by what she walks in. Over the last 7 years or so, God has also brought Apostle Jim C. Becton and Apostle Don Hughes into my life. Both are covenant Brothers who like Angie, I use as sounding boards, get counsel from, and trust all three of them with my life.

I really would not be where I am or doing what I am doing without any of these people being in my life. They were all so needed and vital and imparted things to me many times not realizing that they were, but just operating in their lanes and assignments, what they carried, and who they were rubbed off on me.

I do feel sorry for folks that have not been as blessed as I have been to have such quality leaders and people of integrity in their lives. I also think that many because of the hurts they have experienced have shut themselves off from such blessings. There are plenty of poor leaders out there that abuse and hurt sheep, but there are also plenty of really Godly ones full of integrity and Christ-like character just waiting to pour into people’s lives.

Posted by Living Faith Realities at 6:47 PM No comments:

Posted by Living Faith Realities at 2:44 PM No comments:

Posted by Living Faith Realities at 1:05 PM No comments:

Posted by Living Faith Realities at 9:57 PM No comments:

Posted by Living Faith Realities at 10:32 AM No comments:

Posted by Living Faith Realities at 10:15 AM No comments: